Bardhaman in One Day

Bardhaman has a rich historical as well as a cultural legacy that is kept alive by the number of tourist spots that are spread all over the district. The sightseeing attractions in the city in the form of monuments reflect the immense historical heritage of the city and have quite an old world charm that can make the tourists revisit the various ups and downs that Bardhaman has always been a part of throughout the history of India. The various sightseeing places in Bardhaman can be visited and seen on a day by the tourists who come to this charming little city for short holidays.

One Day Trip to Bardhaman

Here are some places to explore in Bardhaman in one day: 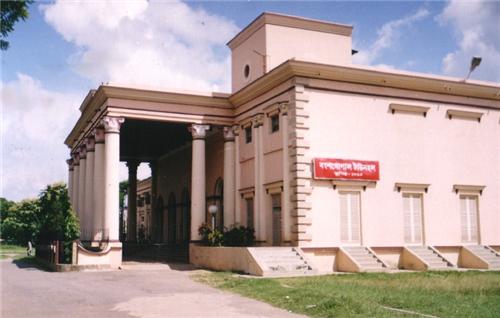 The Town Hall is another popular tourist attraction in the town of Bardhaman that was built between the years 1890 to 1894. This hall was constructed in the memory of Lala Bansogopal Nandey and on May 25th 1984, it was handed over to the Municipality Department of Bardhaman to preserve his remembrances and memories. Currently spread over an area of 2400 square feet, the Town Hall was reformed and extended in the year 1990 from its former area of 704 square feet that held a seating capacity of 485 seats. The hall has been completely air conditioned now and serves as a great example of the historical heritage of Bardhaman.

According to historical sources, Baharam was a Parsi Sultan who stayed in India for a long time. For twelve years, under the instructions of his ‘Guru’, Baharam fulfilled his vow of giving water by the roadside to the thirsty pilgrims on their way to Mecca. After succeeding in his vow, he became famous as a ‘Sufi Pir’ by the name of ‘Sakka’ at this place and the place came to be known as Pir Baharam.
Akbar, the then Emperor of Delhi was initiated by Baharam and he established the Sufi Pir at ‘Puratan Chawk’ in Bardhaman. This holy ‘majar’ is covered by a sheet made up of gold that has been wearing down with age. 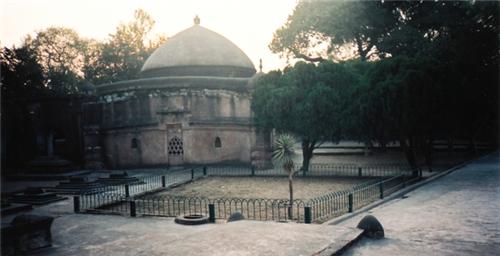 An interesting story has circulated down the ages about Pir Baharam’s arrival in Burdwan. This intellectual and spiritually divine man found a shelter in Barddhaman when he had to leave Delhi due to the machinations of Abul Fazal and Faizi during Akbar's time. In Burdwan, a Hindu divine Jaipal came in close touch with Pir Baharam and they both enjoyed a mutual spiritual companionship. Even today both the Hindus and the Muslims of Burdwan recall Pir Baharam and Jaipal with great regard and respect. Pir Baharam died in Bardhaman and his tomb is present in the city at Mahur Mahal, which is located at Ward no. 19 under Burdwan Municipality. 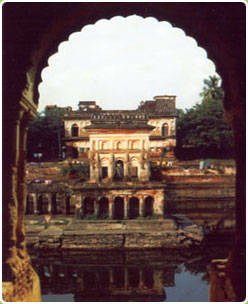 The Nawab Bari of Khaja Anwar Berh is a three hundred years old building which is situated in southern Bardhaman. Surrounded by high walls on all the sides, this structure belongs the Mughal era and the style of architecture employed to construct this building is a perfect blend of the Indo-Syrian style of architecture.

The building houses the tombs of Syed Khaja Anowar and Syed Abul Kasem, who were the commanders of the Mughal army and had been conspired to be murdered at this place. The Nawab Bari was basically set up centring the graves of these two Mughal commanders of the army. It also has a deep pond inside the building and a wind-hall or ‘hawa-ghar’ is situated right in the middle of this pond.

The style of architecture of this place is often compared to the architecture of the tomb of Sher Shah Suri in Sasaram. The place is quite a famous tourist spot as hundreds of visitors come here on the occasion of the holy bath on the first day of Magh. 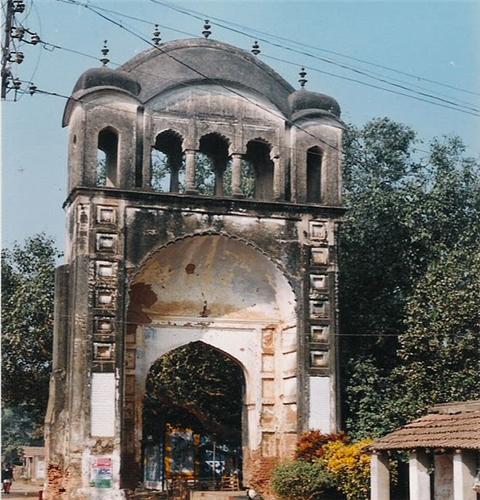 Baroduari is a victory memorial that consists of twelve gates that were built upon the orders of Emperor Maharaj Kirtichand. According to historical evidences, the palace of the king of Bardhaman was at Kanchananagar before the construction of Mahatab Manjil. Shova Singha, a zamindar from the region of Chitua along with some other zamindars from Baroda captured the palace of the king of Bardhaman.

After besieging the palace, the zamindars also imprisoned Princess Satyabati and tortured her ruthlessly. This prompted the Princess to commit suicide but after she had murdered one of the zamindars. To avenge these atrocities, Maharaja Kirtichand conquered Chitua and Baroda in the year 1337. To commemorate this victory, he built twelve gateways out of which currently, only one has been able to survive after all the struggles and has withstood the ravages of time.

Rajbati was the palace of the Maharaja of Burdwan which was inaugurated by the then Maharaja, Mahatab Chand Bahadur in the year 1851. It was also called by the name Mahatab Manjil. Presently housing the administrative offices of the University of Burdwan, the architectural outlook of the palace is resplendent and spellbinding. Maharajdhiraj Uday Chand Womens’ College and the settlement office are also attached to this building. 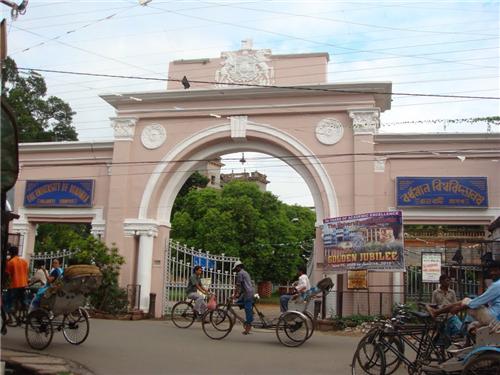 The Regional Creative Art Centre is located in the premises of Rajbati, the royal palace of the Maharajas of Burdwan. Set up in the year 1965 by the University of Burdwan, the Centre houses many collections which include Indian art and antiquities, old manuscripts and documents, marble and stone sculptures, paintings based on the Indo-European school of art, archaeological artefacts and folk arts and crafts. The Centre also has a library where there are more than three thousand monographs on art and archaeology.

The Krishnasayar Ecological Park is a beautiful lake and park that is situated adjacent to the University of Burdwan. In the year 1691, the then King of Bardhaman had ordered a big lake to be dug out to the west of the town covering a total area of thirty three acres of land. This lake was called Krishnasayar. The place around the lake was used as a resting place by the King of Burdwan. Earlier, there had been a high bank surrounding the lake, the remnants of which are still present there. 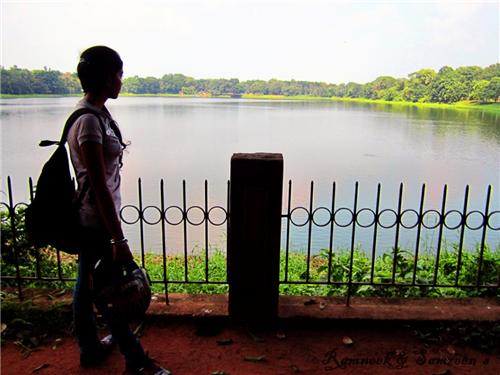 The Board of Trustees of this place has helped to reorganise the Krishnasayar lake and the area surrounding it into a park, as a result of which the park offers many facilities like boating, fish watching in the aquarium and other attractions. The park also hosts a state level dance festival on the occasion of Dol Yatra (Holi) as well as a local handicrafts fair that starts from the first of January every year and continues for ten days. During the time of the local handicrafts fair, a number of other activities and competitions are organised as well which include an art exhibition, a flower exhibition, stories and poetry reading sessions and a folk song singing competition. 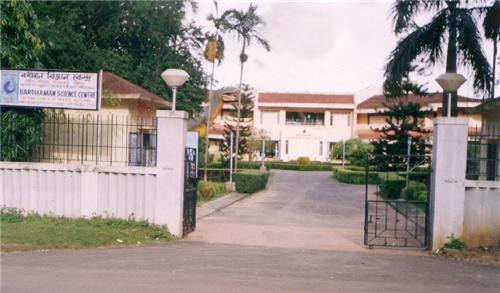 The Science Centre provides a lot of information on scientific facts and mechanisms and there are amazing displays of science experiments which work like magic spells. The most prominent displays of the Centre are the games of the moving balls and balloons and the mystery behind the flying objects. In addition to these, discussion sessions as well as computer training sessions are also organised by the Centre. The centre is open from 11:30 AM in the mornings to 7 PM in the evenings for children, youngsters and adults alike.

The Meghnad Saha Planetarium in Bardhaman is located near the University Complex on the Grand Trunk Road to the north of Golap Bag and was opened up in the year 1994. Named after the eminent scientist Meghnad Saha,the planetarium is considered to be one of the wonders of technology and is one of the best planetariums in Asia which is at par with the international standards.

The Meghnad Saha Planetarium was built by Japanese Goto, a famous optical manufacturing company. It was constructed on an area 5.1 acre of land which was offered by the University of Bardhaman and was constructed with the aid of the grants provided by the Governments of Japan and India as well as the common people. Inaugurated on January 4 1994, the planetarium conducts regular shows in automatic exhibitions on topics such as the revolution of the earth, the solar system and the galaxies and other heavenly bodies.

The Meghnad Saha Planetarium was the second planetarium of the state of West Bengal after the Birla Planetarium in Kolkata and although the seating capacity is quite low, the planetarium has been equipped with instruments using the latest technology that are used for the shows. This centre is open for all from 1 pm in the afternoons to 7 pm in the evenings. 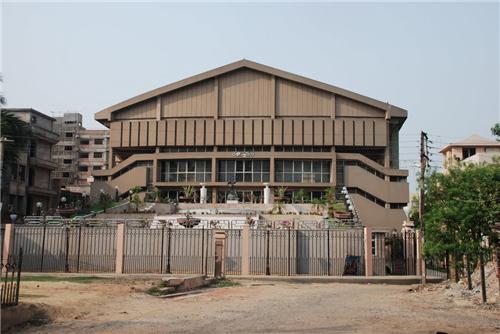 A well-equipped auditorium standing on an area of over one acre of land, the Sanskriti Lokomancha houses 1400 seats and has been constructed with the aid of modern architectural styles which include excellent light and sound arrangements. This building was inaugurated on November 7 1993 and is a joint venture of the district administration of Bardhaman, the Zila Parishad and the Municipality.

Historically, during the days of the East India Company, this place was used for stocking gun powder. The auditorium showcases the films of the Bardhaman Chalachitra Charcha Kendra as well as regularly exhibits good movies from one pm onwards in the afternoons. Besides these, the auditorium also hosts various kinds of discussion sessions as well as different types of cultural functions. A graveyard which dates back to almost two hundred years is at some distance from this place. 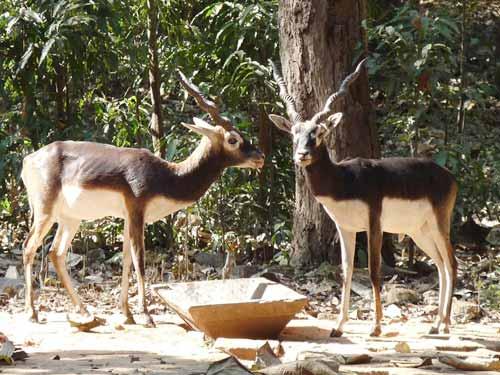 The Deer Park in Bardhaman is a popular tourist destination which is basically a forest reserve and a sanctuary and is noted for the large number of deer that are present in the park. Deer, tigers and a variety of colourful birds are the major attractions of this sanctuary which justifiably add to the charm of the place. It is also known by the name of ‘Ramana Bagan’ which is the forest office of the Bardhaman sub-division. A guest house within the precincts offers the visitors a comfortable stay upon prior arrangements which makes it a wonderful destination for family holidays.

‘Bijoy Bahar’, the tomb of Maharaja Bijoy Chand Mahatab is situated at the north-west side of the Ramana Bagan and is quite a serene and peaceful retreat. The calm and cool environment around this place makes it an ideal place to take a welcome break away from the hustle and bustle of the crowded city streets and to just rest and relax. A small temple is maintained inside this garden by the Mahatab Trust of Burdwan.