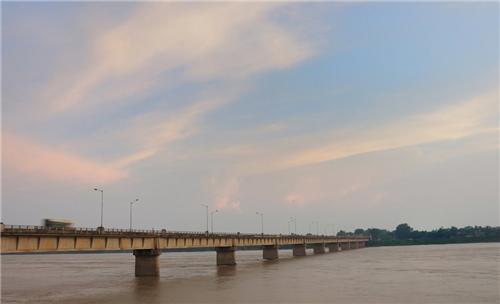 The city of Bardhaman is situated on the banks of the River Damodar and acts as an anchor for this town. The river is considered to be a holy and sacred river by the aborigines of the Chotanagpur Plateau. The River Damodar originates from the Sonajuria Falls of the Bijonsa Hill which is located in the district of Palampur in Bihar. The river joins Barakar at the town of Dishergarh in the Asansol subdivision of the Bardhaman district and then flows through the rest of the district of Bardhaman.

It continues to flow through the districts of Hooghly and Howrah in West Bengal before finally joining the Bhagirathi River, which is the other name for the Ganges in Murshidabad. Bardhaman takes up the shape of a delta along with the branch rivers of the Damodar surrounding it, namely Balluka, Behula, Gangur, Banka and so on, some of which have almost become extinct at present. The civilization of ‘Rarh-Bangla’ has also developed with this river as its centre.

A bridge has been constructed over the River Damodar at Sadarghat which is known as ‘Krishok Setu’ (as pronounced in Bangla). The sandbanks by the river are ideal for picnics for the tourists as well for the residents of Bardhaman and serve as a great tourist attraction. Boating can also be enjoyed by the people in the waters of the river.

Every year, on the first day of the Bengali month of Magh, a kite flying fair takes place on the banks of the river which is called the fair of the ‘Poila Magh’ and which draws a large number of visitors to the banks of the river. The north end of the Krishok Setu on the Damodar River has two traditional and beautiful clay sculptures which capture the essence of the people living in West Bengal. On one side there is smiling farmer couple who are going to work on the fields and on the other side, there is a figure of a ‘baul’, one of the many wandering mystical bards specific to West Bengal who roam throughout the state with their ‘ektara’ and ‘dhol’ and spread soulful music all over the country side. 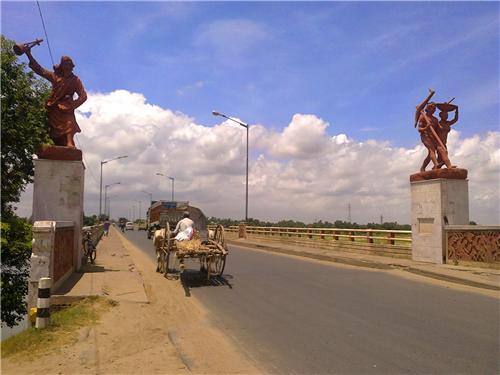 History of the Damodar River

Earlier in history, the River Damodar was also famous as as the ‘River of Sorrows’ as it had a great propensity for causing floods in many regions of the Bardhaman, Howrah, Hooghly and Medinipur districts. The huge volume of water that flowed down the River Damodar and its tributaries during the months of monsoon between June and August, used to overflow the banks by the sides of the river and caused quite an amount of harm and destruction.

These floods were more or less an annual ritual and the people living in these areas faced huge losses and damages. During the floods in the years 1770, 1855, 1913 and 1943, most of the city of Bardhaman was flooded and was heavily destructed due to its submergence under water.

In response to these floods, an agreement was made between the East India Company and Burdwans' Maharaja Kirti Chand in 1789 where the Maharaja had to pay Rs 1, 93,721 more to construct and maintain an embankment to prevent the floods. However, these two powers could not agree on the deal and a dispute occurred as a result of which, The Bengal Embankment Act was passed in the year 1866 and as well as in the year 1873, which transferred the powers to the government so as to maintain and build the embankment.

How to Reach Krishok Setu on the River Damodar 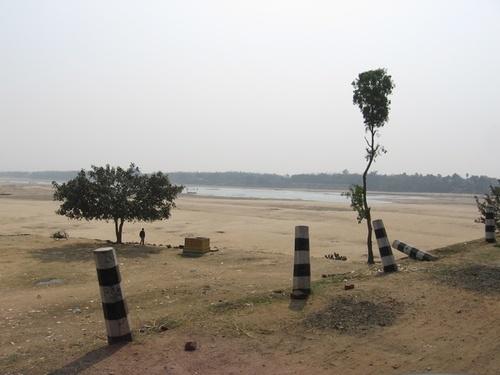 From the entrance to the city of Bardhaman, the Krishok Setu is at a distance of approximately 2.5 kilometres which takes about six minutes to travel via vehicles. The road route to the bridge is as follows:


Explore more about Tourism in Bardhaman