Being the headquarters and the main administrative town in the Bardhaman district, the city of Bardhaman has an average elevation of 40 metres that can be roughly translated as 131 feet. Geographically, the district of Bardhaman extends from 22°56' north to 23°53' north latitudes and from 86°48' east to 88°25' east longitudes.

Covering an area of 7024 square kilometres, the Bardhaman district lies within the Burdwan Division and shares its borders with the districts of Dumka (which is in Jharkhand), Birbhum and Murshidabad in the north, by the Nadia district in the east, by the Hooghly District in the south east, by the districts of Bankura and Purulia in the southwest, and by the Dhanbad district of Jharkhand in the northwest. 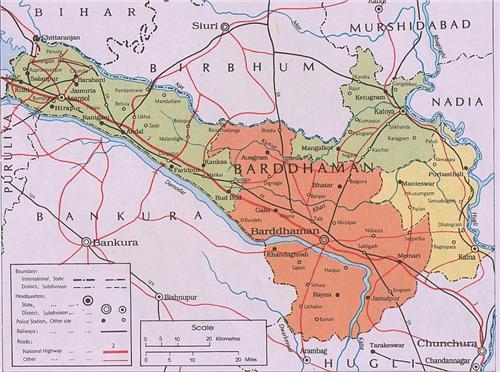 The Grand Trunk Road, also known as the National Highway no. 2 (NH2) passes through Bardhaman, thus underlining the importance of the city as well as the district. The Bardhaman district has six subdivisions, namely, Sadar North, Sadar South, Kalna, Katwa, Durgapur and Asansol. The Damodar and the Ajay Rivers are two main rivers which flow through the district. These two rivers along with the minor rivers like River Barakar and River Bhagirathi which is also known as the Hooghly River form the natural boundaries of the Bardhaman district.

An interesting and fun fact about the district of Bardhaman is that its shape resembles that of a hammer which can be easily noticed when one looks at a geographical map of the district. The dimensions of the district include its maximum length from east to west which is around 208 kilometres and its maximum breadth, which is about 112 kilometres. Bardhaman is the most progressive district in West Bengal as it has made significant advancements in both the agricultural and industrial sectors.

This is largely because of the amalgamation of the rich and fertile alluvial soil on the banks of the Bhagirathi River on the eastern side of the district as well as the abundance of coal mines in the western parts of the district. While the western part of Bardhaman has many industries based on coal, iron, steel and other mineral resources, the eastern portion of Bardhaman is very productive agriculturally.

The topography of the district of Bardhaman is a mixture of various tectonic elements as well as riverine features, which make it a transitional phase on the Chota Nagpur Plateau where the state of Jharkhand is located. The plateau constitutes a portion of a protective covering of the peninsula in the west and the alluvial plains formed by the Ganga-Brahmaputra river basin in the north and the east. These alluvial plains merge with the Damodar-Kasain-Subarnarekha deltaic plains in the south.

In the western part of the Bardhaman district, we can find barren and rocky hillocks made up of laterite soil. Generally, the portion of Chota Nagpur Plateau in the district of Bardhaman consists of a variety of rocks which include the meta-sedimentary rocks of the Precambrian Age, the sedimentary rocks of the Gondwanaland, the Rajmahal basalts and the upper tertiary sediments. In addition, over the passage of years, laterite has developed on these older rocks as well as on early Quaternary sediments.

Bardhaman’s climate can be segregated into the basic four seasons, namely, summers, winters, monsoon and autumn. Since the place hardly experiences any change in altitude, there are no extreme weather conditions experienced by the district and the temperature remains the same almost throughout the whole of the district. However, due to the presence of industries, coal mines and dry lands, the western portion of Bardhaman is warmer as compared to the eastern portion of Bardhaman.

During the period of June to September, Bardhaman is exposed to the monsoon season and the rainfall brings high humidity along with it. The average rainfall during this period is 150 millimetres. The transition from the summer to the winter season is brought in by a brief autumn season in the district, from the months of October to November.

The best time to visit Bardhaman is from the months of October till March as the weather is not too cold or too hot except in the month of January. The weather is mild and pleasant making the tourists’ vacation a truly memorable experience providing good opportunities for travelling as well as sightseeing.

According to the census of the year 2001, the district of Bardhaman has a population of 6.91 million people. The overall population is constituted by over 3.6 million men and over 3.3 million women that can be roughly calculated as 52% men and 48% women. Overall, the sex ratio in Bardhaman is 921 females per 1000 males. The population density in the Bardhaman district, which is a measurement of the population per unit area, is 985 per square kilometre.

The district of Bardhaman constitutes a large number of both Hindus and Muslims and the main language spoken by them is Bengali and Hindi. However, in the remote locations and villages of the district, some local languages along with Bengali in different dialects are also spoken.

The Bardhaman district was among the first few districts to achieve the 100% literacy rate. According to recent studies, Bardhaman has a 77% literacy rate which is higher than the national average of 59.5%. The gender ratio of literacy percentages is around 55% of males and 45% of females.