The soil which can be found in the district of Bardhaman majorly is red soil that develops in a warm, temperate and moist climate and is formed by sedimentary rocks which are rich in iron. In addition to this, the land in Bardhaman is rich in anthracite and bituminous coal. However, the district is not limited to red soil only and other different types of soil can be found within the different parts of the district depending upon the varying conditions of topography, hydrology and geology. 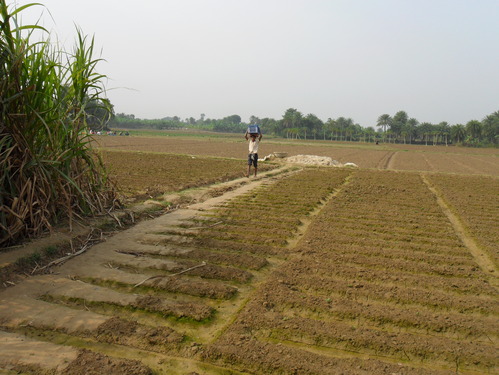 Towards the eastern part of the Bardhaman district, alluvial soil can be found in the low levels of the plain. This soil is made up of sediments which contain a wide variety of materials that include fine particles of silt and clay and larger particles of sand and gravel. Alluvial soil is a fine-grained, sandy and well-drained soil that is highly fertile and slightly acidic in nature and is formed by the sediments deposited by the flowing waters of the Ajay River, the Damodar River, the Bhagirathi River and numerous other small streams and tributaries over the flood plains and the river beds.

In the Western part of the district of Bardhaman, due to the presence of coal mines and other mineral resources, the soil is gritty and course which is coalesced with rock fragments and pieces. These rock fragments are created from the weathering of pegmatite (an extreme type of igneous rock), quartz veins and an amalgamation of sandstones. The characteristics of this soil include its reddish colour, its texture which ranges from medium to course, its low quantity of nitrogen, calcium, phosphate and other plant nutrients and its acidic reaction. The water retaining capacity of this soil increases with its depth as well as with the increase in the quantities of clay in the soil. 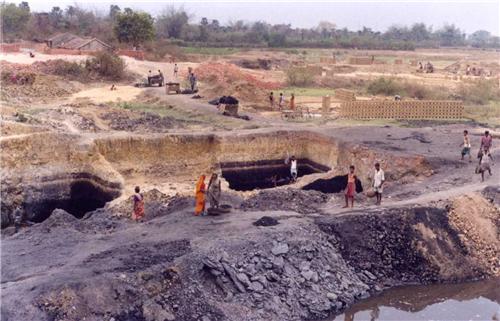 Bardhaman is one of the frontier districts in terms of its rich mineral reserves which are abundantly supplied all over the country. Having over 194 coalmines within its jurisdiction, the district of Bardhaman is the pioneer in the field of coal mining and houses the Raniganj coalfields, which boast of being the land of origin of the Indian coal industry. The Raniganj coal mines have been in use since the early 1800s and various types of coal can be found here which include the superior non-coking variety as well as the inferior quality coal.

Apart from coal, other significant minerals which can be found in the district are ores of iron and calcium carbonate (CaCO3), various types of abrasives which are used for cleaning, polishing and grinding hard surfaces, refractory bricks made from silica, moulding sands made from a mixture of clay and sand, high-quartz glass sands used in glass making, construction materials such as clay, rocks and sand and deposits of minerals such as manganese, bauxite and laterite. Iron ores in the Raniganj coal fields exist as nodules and can be found as small rounded lumps of iron or a mixture of other minerals which are usually harder than the surrounding rock or sediment. 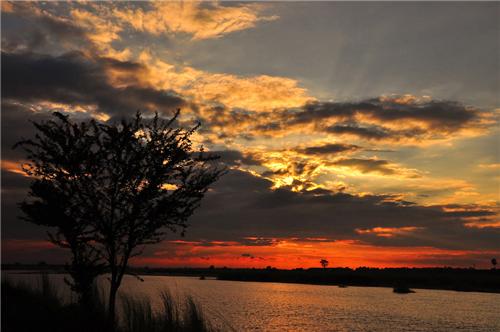 Water resources are abundant in the district of Bardhaman as there are two major rivers flowing through the district, namely the Ajay and the Damodar Rivers along with several minor rivers such as the Bhagirathi- Hooghly and the Dwarakeswar River as well as innumerable tributaries of these rivers.

In addition to these, there are many tanks, wells, canals, swamps and  water holes which can be found all over the district. Some notable tanks, tributaries, wells, canals and water holes include the tributaries of Barakar, Behula and Nonia, the canals like Kunur, Singaram, Khari, Tamla, Tumuni,  Banka and Kukua, the water tanks like Brahmani, Chanda-kanki Nala, Karulia Nala, Dwaraka or Babla, Koiya Nala, Gangur and Khandesvari  as well as the water holes like Ghea, Kakinadi Kandarkahal, Kananadi, Kanadamodar and so on.

The Damodar Valley region also houses around 17000 tanks and the Durgapur Barrage and the Maithon Dam serve as two large water reservoirs in the south-western and in the western boundaries of the district respectively.

Approximately 30,949 hectares of the total land area in the district of Bardhaman are covered by forests. These forest areas are broadly segregated into Reserved Forests, Protected Forests and unclassified state forests and lands. The lofty hillocks of the Sadar and Asansol subdivisions in the district which are covered by red and laterite soils are home to many forest areas. In the Aushgram PS of the Sadar Subdivision specifically, the forest areas are scattered here and there with vast fields of paddy. 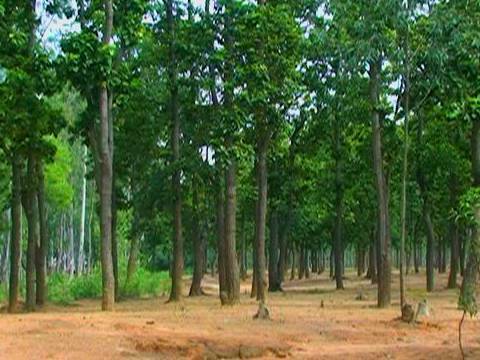 Moreover, forest areas can be found in the Durgapur subdivision which extends beyond the River Ajay into the Birbhum district. Similarly, the forests in the Asansol subdivision form a part of the district of Dumka in Jharkhand. The foliage in the forest areas includes trees of Neem (Azadirachta Indica), Aamla (Phyllanthus Emblica), Sal (Shorea Robusta),  Arjun (Terminalia Arjuna), Coconut (Cocos Nucifera), Mahua (Madhuca Longifolia), Palm (Arecaceae), Mango (Magnifera Indica) and many other species and varieties. 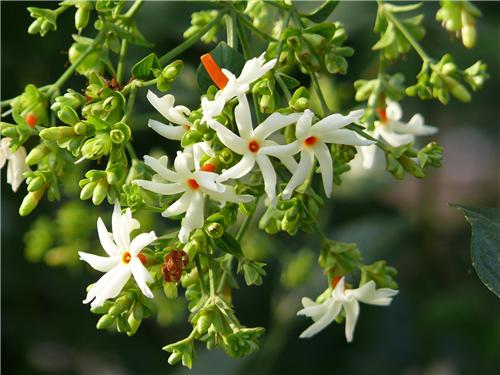 The plants and trees which thrive in the habitat of the Bardhaman district comprise of species such as Simul trees, Neem, Aamla, Coconut, Date Palm, Sugar Palm, Ashvattha (Bodhi Tree), Palash, Shiuli, Krishnachuda (that is the Gulmohar) and Mango. The flora in Bardhaman also constitute species which grow in shrubs and which include plants of Ban Nimbu, Onion, Garlic, Rajanigandha, Ghentu or Bhat, Kurabaka, Gulancha and Tulsi.

The areas where there is a presence of laterite soil and the highlands of the subdivision of Asansol in the Bardhaman district are covered by trees such as the Sal, Mohua, Bamboo, Shireesha, Arka, Kend, Arjun and Ashan. The hedges and the wastelands also contain some local plants like the Lal-bharenda, Ban-okra, Hati-soond, and Ulu.

In the eastern parts of the district of Bardhaman, aquatic and marsh weeds are found in the lakes and swamps. These include species like Keshe, Bena, Pata-Sola, Jhangi, Pond Weed, Kesar-Dam, Kush, Common Jhangi, Pana, Mootha, Water Hyacinth, Bara-Pana and Padma.

Due to the presence of plenty of forests in the district of Bardhaman, there is a great diversity in the animal life as well. The fauna in the district comprise of comprise leopards, wolves, hyenas, jackals, wild pigs and other smaller species. However, leopards and hyenas are not commonly found in the district and wolves can only be seen in the jungles to the north of Kanksa.

The forests in the Asansol subdivision adjacent to the state of Jharkhand were home to a large number of tigers formerly which have now disappeared and have become extinct. The jungles in Bardhaman also house a variety of monkeys including a species called Hanuman. Many poisonous snakes can be found in the district like the various types of cobra, the common krait, the lethal Russell’s viper and an occasional python.  The Dhaman and other varieties of harmless grass snakes can also be seen in the district.

There are multifarious species of birds in the district such as the pea-fowl, the jungle-fowl, the jungle crow, the house crow, the tree pie, the common babbler, Tickell's blue flycatcher , the gold-fronted leaf bird, the red-vented babul, the red-whiskered bulbul, the red spotted blue-throat bird, the brown-backed robin, the paradise flycatcher, the wood shrike, the tailor bird, the streaked fantail warbler, the golden oriole, the yellow-throated sparrow, the house sparrow, the woodpecker, the India cuckoo, the pied crested cuckoo, the koel, the parakeet, the nilkantha, the kingfisher, the hornbill, the horned owl, various types of kites, vultures, eagles, pigeons and doves, goose, duck, teal, lapwing, white necked stork and several varieties of egret and heron.

The district of Bardhaman is a paradise for bird watchers in the winter season as it is in the line of migration and these low-lying swampy areas serve as a great sheltering place for the migratory birds whereby people can spot a variety of birds that are mentioned above.

Many varieties in fishes can be found in the rivers and their tributaries passing through the Bardhaman district. The Bhagirathi River, the Damodar River, the Banka, the Ajay River and the Khari comprise of noted and important fisheries. Some of the many varieties of fishes in the district include rohu, katla, kharke bata, bhangan bata, morola, pabda, tengra, bele, chela, puti, boal, aid, galda, vacha, chital, pholoi, khaira, fensa, silon, bhola and shrimps.

Explore more about Geography of Bardhaman