There are quite a number of religious places in Bardhaman which attract pilgrims and devotees all throughout the year. On special occasions like Maha Shivaratri, large crowds of people throng these temples and these festivals are celebrated with great pomp and show. Apart from the Hindu temples, there is also a Church and Gurudwara for the Christians and the Sikhs respectively, who reside in Barddhaman. Let us visit these pious places now.

Here is a list of religious spots in Bardhaman for you: 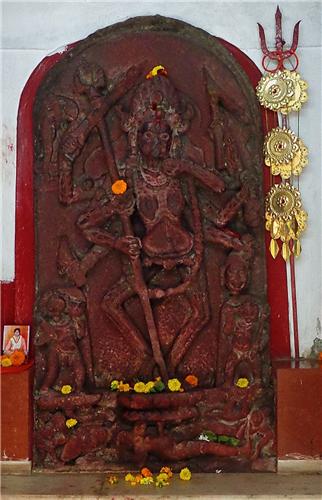 The Kankaleswari Kali Temple is one of the must see places in the town of Bardhaman and it is located in the Brishnu Mandir in the area of Kanchan Nagar in the city. Housing an exquisite idol of Goddess Kali or Goddess Chamunda, as she is more popularly known here, the idol in the temple premises is one of the major attractions for the tourists coming into the city. The temple dates back to being around two hundred years old and the sculpted idol of the deity was found from the river-bed of the Damodar after the devastating flood in the year 1923.
The idol of Goddess Chamunda is engraved in precious black stone and has eight hands and is also garlanded with a chain of statues which comprise of human heads. A remarkable feature of the idol is that each and every bone in the body of the deity is clearly visible and every human muscle and vein is quite intricately carved, thus making the name of the temple to be rather apt with respect to the idol. 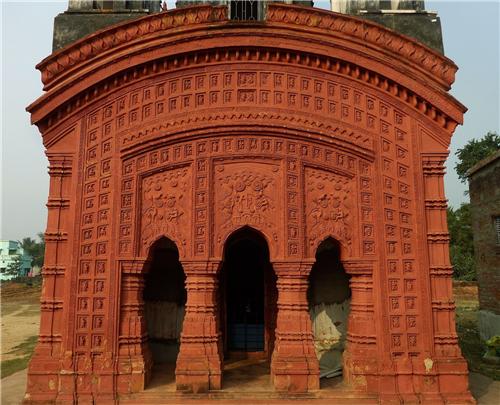 The construction of this idol is believed to have been influenced by the concept of ‘tantra', however, the historical date of the statue is still unknown. The body of the statue is somewhat uneven and the idol of Goddess Kali has a trident, which is a three-pronged spear in her hand. The walls of Kankaleswari Kali Bari are decorated with different patterns of terracotta panels which are quite specific to the style of architecture which is present in the other monuments and temples in Bardhaman.

The Bardhamaneswar Shiva Temple is situated in the Burdwan Municipality and houses a huge idol of lord Shiva in its premises. The statue of the idol is believed to have been built in the twelfth century and its height is quite unparalleled in the entire state of West Bengal. Commonly known as ‘Mota Shib’ or ‘Mota Baba’, the circumference of the ‘Gouripatta’ of the idol is 18 feet. According to the Bengali calendar, on the twenty fifth of Shravana in the year 1379 or as it can be transcribed according to the English calendar, 1973 AD was the year in which the statue of Bardhamaneswar was discovered while digging the earth at Bikharibagan in Alamganj, which is located at the south-west direction of Rajbati. 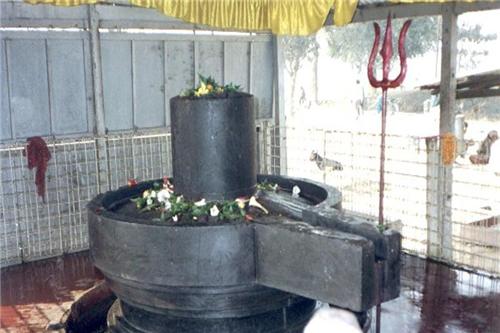 According to Hindu mythology, Chand Sadagar, was believed to have worshipped the idol of Lord Shiva in Bardhamaneswar. He was a rich and powerful merchant of Champak Nagar in ancient India who was also an ardent devotee of Lord Shiva. A large number of devotees and pilgrims visit the temple on the occasion of Maha Shivaratri as well as throughout the rest of the year to worship and pay their homage to Lord Shiva. 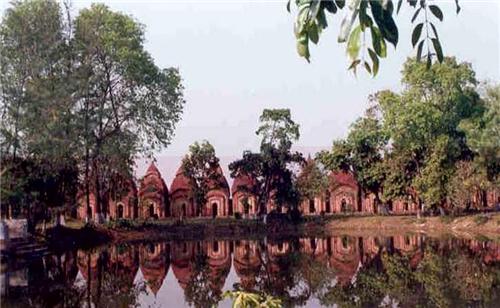 In the I Block of Burdwan, just four kilometres from the railway station and on the Burdwan-Siuri National Highway, there is a huge picturesque complex which comprises of a group of 108 shiva lingams which are housed in 108 small temples dedicated to the lord. In the year 1788, the widow of Maharaja Tilakchand, Rani Bishnu Kumari, who was also the Queen of Burdwan, had received divine instructions in her dream after which she had ordered these temples to be set up. 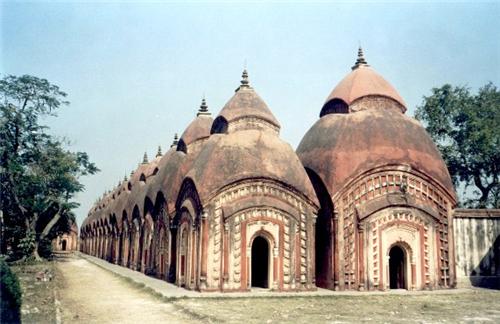 These one hundred and eight Shiva temples are constructed based upon the architectural styles of the typical huts that are made up of mud and which can be found in the villages all over Bengal.

Located in the historically famous region of Nawabhat where the battles between the Pathans and the Mughals took place, these 108 temples are divided into two circles with black and white shiva lingams inside them.

The complex has beautiful scenic surroundings with a charming garden and a lake. On the occasion of Maha Shivaratri every year, a huge week-long fair takes place in the temple premises which attracts a large crowd of people. Apart from this, the temples are visited by a huge mass of devotees all the year round, especially on Mondays whereby the pilgrims throng the temple complex. 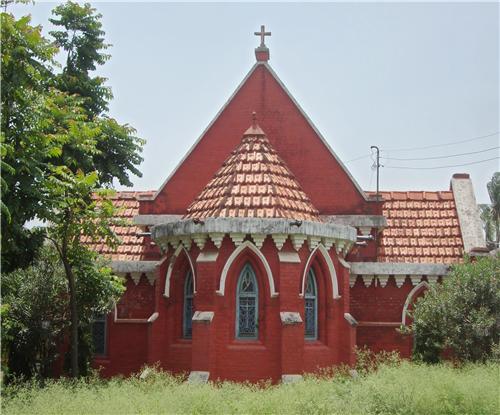 The Christ Church in Bardhaman was constructed in the year 1816 by the Church Missionary Society. The society had bought the land between Curzon Gate and the Head Post Office from the then King at Rs 12.50 per annum as revenue.

An East India Company officer, Captain Charles Stuart was the primary authority who had obtained the grant from the King for the maintenance of the Church. The Church is a brick structure and is an excellent example of European style of architecture that is one of the most pious places for the Christians living in Bardhaman as well as a major tourist attraction.

The Sikh Gurudwara in Bardhaman is located on the Grand Trunk Road near the Burdwan Municipality. Founded by Lieutenant Colonel Baba Harikishan Singh who was a civil surgeon by profession, the gurudwara was set up as an evocation of his parents between the years 1930 to 1935. According to religious myths and beliefs, Guru Nanak Singhji, the founding father of Sikh religion, had stayed for a few days near the Gargara Ghat at Shyaam Bazaar in Bardhaman. Many years later,  a gurudwara was built in this place which was named as Guru Nanak Charankamal.